Last month, we saw the US pull out of the Paris Climate Accord. While we have no idea of the implications of this decision, especially because the mayors and governors of the country are sticking to the promises of the accord, we know this decision carries more negative than positive for the future of the country and competing in the global economy. We know that the rest of the world thinks we are a joke, as we hangout in ignorance with Syria and Nicaragua. And we surely know that Global Climate Change is real.

My classmates and I have heard countless stories of sustainability practices in Denmark, Sweden, and the Netherlands that are used in these countries, as they do their part (and more) to aid in the fight against climate change. We know that Denmark and the Netherlands are made up of many islands and low-lying areas that could be completely wiped away with sea-level rise caused directly from global climate change. But it is amazing to see these countries thinking with poise and resilience to fight.

One day in Copenhagen, our group visited the under-construction Amager Bakke waste-to-power incinerator plant. According to The Guardian, the plant will burn 400,000 tons of waste annually, produce enough clean energy to power 60,000 homes, and will produce steam to heat homes. The waste works its way through the power plant until the waste product is only pure water. This plant is part of the plan to make Copenhagen the world’s first zero-carbon city by 2025. Now, you may assume that this plant is an ugly addition to the beautiful cityscape… but it is not. It was described by Bike Mike (remember him?) as the City’s next Little Mermaid, in reference to the tiny statue that is the City’s largest tourist attraction. It is a modern-looking building clad in aluminum and has a sloping rooftop that will become the world’s longest artificial ski slope.  This plant is going to burn Copenhagen’s garbage, then produce clean energy in tandem with Denmark’s wind turbines, and then residents and tourists can visit the power plant to ski down the roof or just watch skiers from the park space around the building. It is just another example of the innovation that Denmark works with. 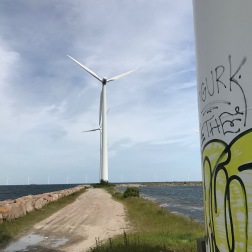 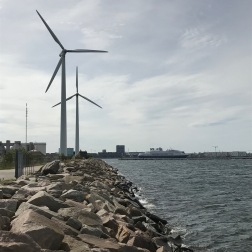 On only the second day in Copenhagen, I experienced sustainability on a much smaller scale than this beautiful behemoth of a power plant. My classmate Seth and I were sitting on a bench taking a break from our scavenger hunt around the City and enjoying a beer. When we finished, we tossed our cans into a garbage can, thinking that there was no other option. Almost immediately, an older gentleman came over and started speaking Danish to us as he picked out the cans from the garbage can. He wasn’t angry and when he realized we did not understand, he started speaking English. He directed us across the street to the nearest grocery store to deposit the cans. The little things matter too.

In Sweden, the Fourth of July was a day entirely devoted to Sustainability when we met with Louise Lundberg, an Ecologist with Green Inspiration. She brought us to two developments in Malmo, the Western Harbor and Augustenborg. The Western Harbor project is a newer development, the initial phase being completed in 2000 and later phases still being constructed. The project is built on land that was formerly polluted by ship building companies that failed in the mid-80s, leaving behind mass unemployment and ultra-polluted, ocean-adjacent land in Malmo. No one could see the polluted land ever becoming livable; however, instead of looking back on the failing industries (like our coal industry), the City of Malmo decided to aim towards a more knowledge-based economy. Malmo started a new university that helped to move forward its environmental thinking. The first phase was designed by twenty different architects, due to the requirement that developers were only allowed to buy a maximum of two plots within the planned community. It was built-out to be an energy self-sufficient neighborhood with much attention to detail. Within the development, there is minimal vehicle access with many access roads ending with a wide enough gap for cyclists and pedestrians only. There are amazing sight lines, the scale is made to manage the lighting and energy consumption, and it is simply a beautiful development. The Malmo bus system added bus routes that connected low-income neighborhoods with the development to create an urban amenity that welcomes everyone (this never happens in the United States). Car-sharing memberships are free for residents for the first five years. The detailed attention was paid to energy consumption, urban design, and the transportation system. The one issue our class had with the development was that this development was not built to be affordable, which took us cycling to the second site, Augustenborg.

Augustenborg was initially a development built for the working class during the 1950s, as Malmo’s industrial economy boomed. The development looks similar to our 50s-era government-subsidized housing in the United States. Into the 1970s and 1980s, the development became known as a crime- and drug-ridden area and residents began emptying out. These issues caused the City to look into other solutions for redevelopment. Instead of completely removing the public housing, they chose to renovate the existing structures into an “eco-community”. Public involvement played a major role in the renovation, as planners and designers held meetings attended by a significant percentage of the residents and even went door-to-door to listen to their issues and needs within the community. Water Engineers worked towards creating a sustainable community by designing eco-roofs to handle 50% of the rainwater, while the other 50% runs through small canals, and into rain gardens where the water is either becomes ground water or is evaporated. Many residents stayed through the renovation and the community is lively and safe again. Louise left us with some departing words that I definitely will take with me into my future endeavors, “We have to think for ourselves, we have to be critical of what is happening around us. We must let everyone in and leave no one shut out… Don’t let the great get in the way of the good.”

Finally, when we were cycling on the way from Utrecht to Amsterdam yesterday, our group experienced preserved lands around a castle, the below sea-level Netherlands, and a working wind mill. After a couple of incidents of one of my classmates getting bumped by another cyclist and another classmate’s chain falling off, our group rode through beautiful countryside to a castle that looked like it was right out of a fairytale story. It was surrounded by beautiful greenspace and canals, with more below sea-level land even farther out. The canals are higher than the actual land in this area, which brings about the need for the wind mills. The wind mill we visited was built 350 years ago and had stopped working after WWII. In time, the wind mill was renovated and working again. An older couple take care of the wind mill and showed us how all the mechanics worked. I had an opportunity to stop the mill from running. It is crazy to think that without these wind mills; the Netherlands would be under water. Instead, they have canals (built centuries ago) that are higher than the land and a military mechanism of flooding the canals into the land in worst case scenarios. People here value their land that has been engineered and planned to near perfection, with dense cities and towns and the mechanics to keep the lands dry. But they are now threatened by sea-level rise, which would win out on the past engineered and planned lands.

The Dutch clearly care and are willing to invest resources for possible future success in the short-term and the long-term. Economics now. Lives and lands later. They created a more sustainable society because they care about the future. So just as the Dutch (and Danish and Sweden) said they had two options: “either pump the water out, or drown,” they are now saying, “treat the environment better, or drown.”

There are places in the United States that we should be thinking with this same tone. Sustainability matters.