I never realized how lucky I was to live within cycling distance of my school growing up. As our group traveled around Copenhagen today to observe how the City (and Country) designs for children to cycle and play independently at a young age, I was able to talk to a few of my classmates about their experience growing up on a bicycle. It turns out that most people didn’t learn how to ride a bike at as young of an age as me, and even worse, they did not ever use a bike to travel to others places when they were young. When I take a step back from all of our observations today, it is almost like I had and upbringing similar to Danish children… Almost.

I grew up in a middle-class suburb north of Detroit in the infamous Macomb County (if anyone knows politics, they know Macomb County). The County is planned in nearly square-mile blocks of residential with business along some of the periphery and retail on the corners. These blocks break up the townships (and now cities) that were surveyed out when Michigan was still a territory. The townships were surveyed in six-by-six miles and each square mile had to have a school house. Even in the 90s, my elementary school was in the middle of the square-mile block. I would argue that the suburbs of Detroit were developed with some of the best ideas of what a suburb could be. Think Lewis Mumphrey or Clarence Stein, who’s early plans were thought out with grids, public space, and eventual transit in mind (although they didn’t turn out that way). They are denser than what you would find in the suburbs of the South, there is some mix of density and income, and there are damn good schools (thanks Mom and Dad!).

When I was 10 years old, my friends and I would ride our bikes to school. We would ride to the 7-11 for Warheads candy, or to the local Tony’s Pizza for a slice. We would ride up to the sports cards store to trade our cards with the owner and sometimes even make a couple of dollars. We would travel to places on our bike, it being the earliest form of transportation besides my own legs, I had available to me. We were quite the privileged bunch, I would say.

The difference from how we were brought up and how the Danish are brought up is this… When I would leave the house on my BMX-style DYNO Cycle with my buddy on the back pegs (we thought we were so cool!), my parents would tell me to stay close. “Stay close” meant to not go farther than the corners of our little suburban bubble. This would keep us from crossing the arterial roads that surrounded us, and we were always riding on the sidewalks anyways. Never a possible conflict with a car going faster than 25 mph, 30 mph maybe for the speedy ones. In Denmark, children are taught how to ride a bicycle at a very young age. They are taught to follow traffic laws and ride in the road. The sidewalks are for the pedestrians, the bikes belong in the bicycle lanes or in the road. Every school in the Copenhagen area attends a couple of days of practice at the Trafikvejen to learn the basics of riding a bicycle in the city. After the formal program, it is on the parents and grandparents to take the children to the miniature roadway course to continue teaching them until they seem ready to get out on the road on their own without supervision. I spoke with Iben, a sweet woman who brought her two grandchildren to the Trafikvejen, and had also been trained to ride a bicycle here over 60 years ago. Ya see, generation after generation has bicycle transportation engrained in them. I assumed Iben was a volunteer, but she said that she just likes to bring the children to the park to have fun and at the same time learn how to ride a bicycle. She said that generally, the children begin to follow the traffic laws (while racing after each other) and that they tend to rub off on each other and do it right with time. She mentioned that eventually the parents need to let go and let their children be independent, so that this was the best way to feel comfortable while still being nervous. As Iben and I were standing there laughing at her grandchildren following a boy on a scooter following zero traffic laws, a smaller boy not older than five rode towards us on his stride bike (a new-age training bike which teaches balance). His older teenage brother,walking with him as a teacher, began walking across the street when the signal showed red and the little boy yelled out, “NO!” The teenager quickly proceeded to back up behind the white line. 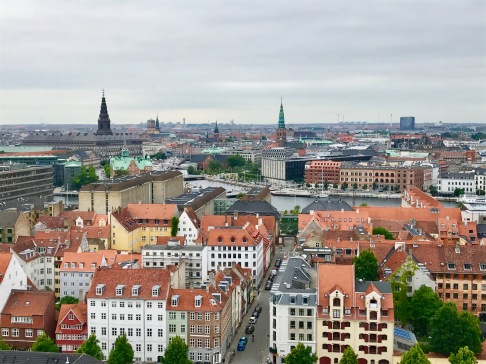 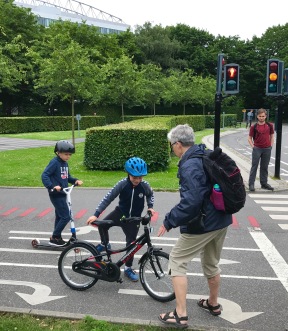 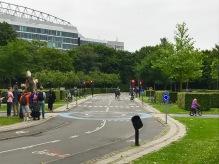 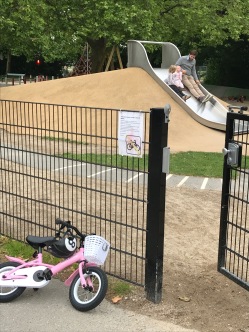 There was a similar experience when a toddler-aged girl walked up to the gate to the playground with her bicycle. I held open the gate for her and she started shaking her hand and head at me. I initially had thought I startled her, but she then pointed to a sign that said “no bikes”. It was a beautiful experience to see all of the kids having so much fun while learning a function that they will take with them throughout life.

Earlier in the day, we walked up to a daycare and school where students play in different facilities that are laid out like a mini city. We walked in without permission or speaking with an adult working at the facility to observe. One of the younger boys stopped playing soccer and poked his head out and tested out his newly learned English to me, “HELLO,” he energetically yelled. Shortly after, an older woman came out of the classroom and asked me what we were doing there. We directed her to our Danish-speaking friend, Henrik, and he explained to her. Two of the children were at her side the entire time and one of the kids yelled out something about “American basketball” and we all chuckled. Can you imagine what would have happened if a group of 20-somethings and a couple of older people walked into a daycare with no permission in the US? The entire place would be on lockdown and we would be arrested, or at least spending the night in jail. It is just safer here, with low gun-ownership, and unlike our country, their universal healthcare takes care of those with mental health issues and doesn’t see it as taboo. 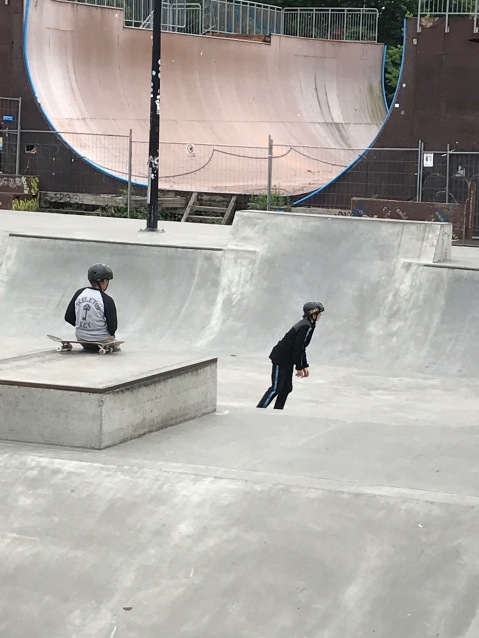 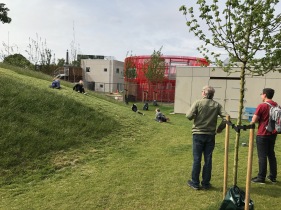 It was amazing seeing the City from a child’s perspective today. The kids just seem to get it here; moreover, they seem to be more independent at a younger age. They enjoy riding their bicycles, skating in the many skate parks Copenhagen has to offer, and running around the park without helicopter parents hovering around them. It is said that if you can’t design the transportation system to work for children, then it fails us all. Copenhagen is the perfect example of where is works for everyone. Where the children can roam free, and the parents can live with less worry and stress about.

It is time for the United States to get its own “Trafikvejens” in our cities. Children living in a safe city with the ability to travel around on their own at a young age.. Now that is Freedom!

One thought on “For the Kids”